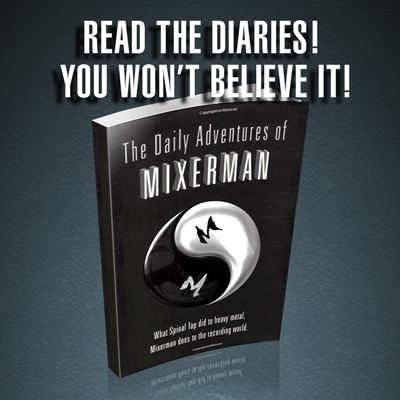 It’s a satire based on the recording of a big budget album in 2002: back in the days when major labels threw money at bands, rich with the money from reselling catalogue on CD. Mixerman (engineer/producer Eric Sarafin) details his sessions with Bitch Slap, a ‘bidding war band’ : not particularly much to do with the technicalities…mic choice, pre amp settings and the like, but a massive amount to do with the idiocy of major labels, and the characters surrounding a band signed for silly amounts of money with the pressure on to sell hits. Well, to sell hits, they need to record hits, and that’s where the diaries reveal such a wealth of characters anyone who’s ever worked in the music industry will recognise. The recording of these hits is painful at best: ghost bassists, session drummers, girlfriends, preening singers, astounding wastes of money…all told in such a warm way by Eric with a story that unfolds in such a great way.Very much a time capsule in some respects of how never ending budget albums were made.

Mixer man clearly knows his onions: his people skills, the way he reads a room and the band, the way he recognises the dynamics of the team and tries so hard to progress the sessions is so interesting, and, so often made me laugh out loud.

This book should be essential reading for budding producers, engineers and bands: read it, absorb it and the mistakes that were made and learn from it!

More books to read, am some way into Zen and The Art of Mixing, and that’s making me look at mixing in a different way: great perspective changer.